Growing up in a Christian religious family, you hear the famous trinity line all the time: the father, the son and the holy spirit. I used to not question it because, in general, conservative Christians do not allow for much questioning. But now as my beliefs are changing, I find it strange that the mother is not mentioned at all. The only reference to a mother is the Virgin Mary, but she is not officially considered a god, as the father is considered. Older religions and belief systems have included goddesses, but it is obvious the erasure of the goddess mother is due to patriarchal systems that came into play in the last few thousand years. So, this post will be a list of some interesting facts, stories, art, events, ideas etc. dedicated to the Madonna and child.

1) Isis/Auset and Horus/Heru: The Egyptian goddess and her son has been said to have influenced the Christian story of God, the Virgin Mary and Jesus. The story goes as follows: Osiris/Ausar, the husband/brother of Isis/Auset, is killed by his brother Set/Seth. Isis finds for Osiris’ broken body and puts it back together to resurrect him for a short time, and she is impregnated by him. Then Osiris becomes Lord of the Underworld and Isis gives birth to Horus/Heru. When he is older, Horus challenges his uncle Set to a battle and ends up becoming king after the battle.

2) Black Madonna (Mary) and Child: In many parts of the world, even in several European countries, there are many statues of a Black Madonna and child and there are just as many theories out there as to why they are dark in color. 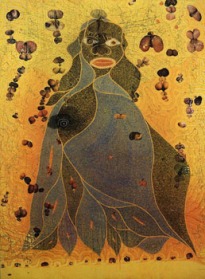 3) Chris Ofili’s “The Holy Virgin Mary:” In 1999, Ofili stirred up controversy when he put this artwork up in the Brooklyn Museum’s exhibition, “Sensation.” The painting depicts an African Mary with her right breast out, which was created using elephant dung (in several African cultures, dung is a sign of fertility because it was used to grow crops), and cherubim and seraphim in the background made from photographs of female genitalia. Mayor Giuliani as well as a number of Christians had a fit over the painting and demanded it to be taken down. They claimed that the painting disrespected the Christian faith because it had dung smeared all over it (which is not true) and pornographic images. This pieces definitely brings out people’s lack of understanding of cultural difference and context

4) Ezili (Ezurlie) Dantor (Danto/Danthor): She is the Haitian Vodou version of Mary and Isis. She is also associated with the West African Orisha goddess, Yemaya and Mami Wata. 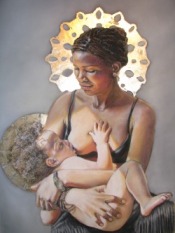 5) Kate Hansen’s Madonna and Child Exhibition: She is an artist from British Columbia and has done a project called, “Madonna and Child” in which she does portraits of mothers and their children in the form of the traditional Madonna and child paintings style.

6) Is the Holy Spirit the Mom?: Some have theorized that the holy spirit is the feminine aspect of God. 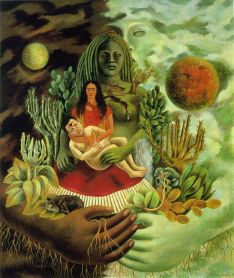 7) Frida Kahlo’s painting “The Love Embrace of the Universe, the Earth (Mexico), Myself, Diego and Senor Xolotl:” This is one of my favorite Kahlo paintings. In it, she uses aspects of Mexican mythology (the Aztec Earth Mother, Cituacoatl) and reflects her relationship with Diego Rivera and her feelings on her inability to have children. So, she is taking on the role of the universal nurturing mother. Another painting of hers that includes the motherly aspect is “My Nurse and I.” In this one, Kahlo changes the nurturing aspect of the mother to something cold and distant.

8 ) 1+1= 3?: To bring mysticism into this. Another phrase used in Christian circles is that there is “God in three persons” or that there is 1 God that has three forms. The number 1 is usually associated with God/Goddess. How does that relate to the equation above. Well, it is a kind of magic when 1 father and 1 mother can create a whole new being, which makes three people instead of two. So, I see the holy trinity as that special creation.

One thought on “The Holy Spirit – Mother and Child”