We are embedded in space, even if we do not travel to outer space, and social politics have revolved around the the struggle to define time and space. Several artists have appropriated the terms, astronaut and aliens, and used them in their artwork within an afrofuturist context:

1) The above video is an excerpt from Soda Jerk’s (sisters Dan and Dominique Angeloro) Astro Black installation which examines the connections between space exploration and aliens stories, and black Atlantic social politics, such as the practice of abduction. 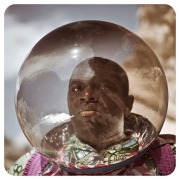 2) Cristina de Middel created a photograph series called Afronauts, which shows an inclusive approach to space travel. The United States and Russia are not the only places that thought about space travel. For example, in 1964, after Zambia gained its independence, it wanted to start a space program.

3) Jefferson Pinder’s “Afro-cosmonaut/Alien (White Noise)” is “an escapist video narrative that ends in destruction when the protagonist plummets back to earth after a mystical space journey. Like Icharrus, the epic fall comes after reaching a brilliant zenith that is both mesmerizing and lethal. This white-faced Butoh inspired performance is a crude metaphor of the civil rights legacy. Taking cues from experimental films, I plant myself within my work and ask the viewers to watch the images of propulsion and power.” Besides using several images, such as the launch of first U.S. spaceship into space and Martin Luther King, the video also samples samples Gil Scott-Heron’s “Whitey on the Moon.”

4) Speaking of Heron, he also did a song called, “Alien (Hold Onto Your Dreams),” which is about those who immigrate to America in hopes of living the American Dream.

5) Slate also posted an article on the history of Afronauts, from preacher Rev. Nix to Lil’ Wayne.

6) Fast ‘n’ Bulbous did a post on the Afro-Alien Diaspora, which is a discussion on the alien images used by Funk musicians.