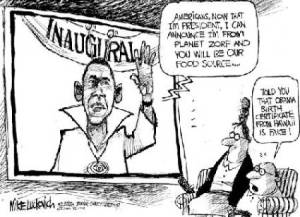 “They say that President Obama is a Muslim, but if he isn’t, he’s a secularist who is waging war on religion. On some days he’s a Nazi, but on most others he’s merely a socialist. His especially creative opponents see him as having a “Kenyan anti-colonial worldview,” while the less adventurous say that he’s an elitist who spent too much time in Cambridge, Hyde Park and other excessively academic precincts.Whatever our president is, he is never allowed to be a garden-variety American who plays basketball and golf, has a remarkably old-fashioned family life and, in the manner we regularly recommend to our kids, got ahead by getting a good education.

Please forgive this outburst. It’s simply astonishing that a man in his fourth year as our president continues to be the object of the most extraordinary paranoid fantasies. A significant part of his opposition still cannot accept that Obama is a rather moderate politician quite conventional in his tastes and his interests. And now that the economy is improving, short-circuiting easy criticisms, Obama’s adversaries are reheating all the old tropes and cliches and slanders….

But there is something especially rancid about the never-ending efforts to turn Obama into a stranger, an alien, a Manchurian Candidate with a diabolical hidden agenda. Are we trying to undo all the good it did us with the rest of the world when we elected an African American with a middle name popular among Muslims?…”

Although he hints at it in the title and the article, Dionne never explicitly says that due to racism embedded in this country, people will see President Obama, the first black president of the United States, as “other,” “strange,” “weird” and as Dionne says “alien.” It is the reason the birthers question his birthplace, his citizenship and his religion. He is seen as not as American, but a “brother from another planet.” Just read about the Alaskan man’s lawsuit claiming that Obama cannot be president because he is black.