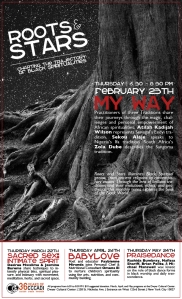 Tuesday was my last day of classes, so yesterday I decided to treat myself to a few of exhibitions. First, I went to the American Museum of Natural History to see “Beyond Planet Earth: the Future of Space Exploration.” Upon entering, we saw my favorite astrophysicist, Neil deGrasse Tyson, speaking in a video about the importance of thinking about space. However, when I entered I was less impressed, given that this exhibition cost me $19. It was not so much that the exhibition was not informing or interesting, it was much more the perspective from which it was told. Basically, a mostly Western and European focus. I kept feeling as I walked through it, what about other cultures who have speculated about and wanted to explore space.

The first section of the exhibition centered on the space war between Russia and the United States. Walking through, we learned about female astronauts like Sally K. Ride, that Russians called astronauts “cosmonauts,” that rocks from space smell like gunpowder inside the spaceship (no smell in space), about businessmen like Jackie Maw, Elon Musk (of Paypal) and Richard Branson who are trying to send private citizens to space, putting bases on the moon and landing on asteroids, and that Mars and Jupiter’s moon Europa could possibly have life on them because they show signs of water. The exhibition included literature that speculated on space like Jules Verne’s “From Earth to the Moon,” and history of people wondering about space. There was even some talk of international space station and global space exploration. However, that focused on China, Japan and India (not much of India).

But what annoyed me the most was all of it was still from a very Eurocentric perspective. It did not mention other cultures and books from other cultures who have thought about space, even before the Greeks or other Europeans started (that was exhibition’s starting point.) Writers of other cultures have written books about space. Including Tyson, space exploration of China, Japan and India, and having an app commercial with a Black girl in it is not diversity. Also, where was the deeper discussion of the larger implications of space travel, since most of the people who would go would be rich (and mostly white), leaving the rest of us here with less resources because they are diverted towards space exploration. I could hear Gil-Scott Heron’s “Whitey on the Moon” in my head.

So, I left the exhibition and went around the museum. I came across the African Peoples section and headed on in. The problem I have with some museums is that it objectifies everything, not just the art, but animals and people as well. While, I did appreciate that this exhibit had a more humane approach to African people and their cultures, included Egypt (although it was in the corner part way in the back), unlike the Metropolitan Museum of Art that treats Egypt as separate from Africa, and included the diaspora and slavery, I was disturbed by something. Throughout the museum, there are exhibits of people from Africa, Asia, Pacific Islands, and indigenous Americans, but I found none of Europeans. So, basically we are still treated like objects and artifacts from the past, not living, breathing people.

This is the reason I decided to go to another exhibition, the Caribbean Cultural Center‘s “H(a)unted,” which was dedicated to Trayvon Martin. The exhibit spoke to me as a human being. As I read artist Zeal Harris‘s information for her piece “Our Brother, Our Sun,” she mentioned that a conceptual conversation on art history is needed. She thinks that too much art lacks substance, soul and concern for issues. And that is how I felt looking at each piece; all of them had a sense of spirit in them that was very much alive. I appreciated the art that challenged perception of Black manhood. The art that spoke to the American fear and constant surveillance of Black men (and Black people in general), the lack of acknowledgement of Black humanity, and the ties between spirituality and physicality for us. The art that highlighted our history that still haunts us despite many telling us to forget about it. It was beautiful how we could stand up despite all the crap we have to stand in and thrown at us. Exhibitions that do this are much more important than an artifact on the wall. We should not only reach for the stars, but keep grounded as well.