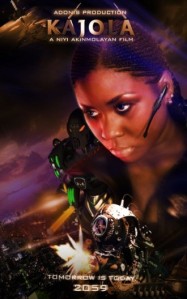 Jonathan Dotse from AfroCyberPunk wrote an article a few weeks ago on Institute for Emerging Ethics and Technologies about re-examining science fiction narratives, “developing nations,” and social change:

“The future will not be a monopoly of the current superpowers, but lies in the hands of tech-savvy youth from around the world, trying desperately to survive at all costs in an increasingly asymmetrical world.

Imagine a young African boy staring wide-eyed at the grainy images of an old television set tuned to a VHF channel; a child discovering for the first time the sights and sounds of a wonderfully weird world beyond city limits. This is one of my earliest memories; growing up during the mid-nineties in a tranquil compound house in Maamobi; an enclave of the Nima suburb, one of the most notorious slums in Accra. Besides the government-run Ghana Broadcasting Corporation, only two other television stations operated in the country at the time, and satellite television was way beyond my family’s means. Nevertheless, all kinds of interesting programming from around the world occasionally found its way onto those public broadcasts. This was how I first met science fiction; not from the tomes of great authors, but from distilled approximations of their grand visions…”