Syncing up with my work as the literary director of the Queens Book Festival, my first official return post is my long overdue interview with Nichol Bradford, author of the novel, The Sisterhood!

Nichol Bradford has had an accomplished career, first as an executive in the gaming industry, and now as founder and CEO of the company, the Willow Group, developing what she calls “transformative technology.” While, yes, we humans have been innovative when it comes to technology, I can’t say that we have been as innovative  psychologically, socially and spiritually. I see Nichol’s work as part of the legacy of Amiri Baraka’s questioning of modern technology in “Technology and Ethos.” The Willow Group’s mission is to use “effective technologies for creating permanent positive shifts in peace of mind, mental balance, life satisfaction and happiness. From ancient practices to cutting-edge science, our programs help you assemble a personalized program to reach your goals.”

As an explorer of human potential, and how technology can bring about transformation in our everyday lives, helping us to expand beyond our perceived limits, Nichol has combined her knowledge from business, gaming industry and her work with The Willow Group to write her first book, The Sisterhood! The Sisterhood follows the story of an organization of the same name led by nine black women. The book opens up with the death of its visionary leader, Vivian Delacroix, and how the remaining leaders cope with not only her tragedy but also moving on with the organizations mission to develop sciences and technologies to empower communities, of especially women, all over the world, confronting Cocanol drug cartels, corrupt governments, secret societies and a media circus surrounding Vivian’s assassination, and dealing with their own personal lives.

We see what these women are willing to sacrifice to create break the mental chains of society and create a better, more whole future for others. At a deeper level, The Sisterhood is a blueprint for how to make changes in one’s life, how we can use the principals of visionary planning, financial literacy, science, technology, martial arts, leadership, spirituality, community service and responsibility to change our world.

As I am writing my own fantasy novel with black women as several of the main heroes, I am encouraged by such impactful work like Nichol’s The Sisterhood, which shows black women as strong, vulnerable, heroic, complex, loving and can be loved passionately, too. As part of a growing organization myself, it is great to see another work that shows black woman having the ambition to go after what they want to achieve in life.

Nichol’s work has been reviewed and featured on such places as The Searchlight Project, Black Girl Nerds, Keisha Howard’s Sugargamers, a culture and video game site that also did a cosplay photoshoot series for the book, Ella D. Curry/EDC Creations‘ BAN Show, and Blerds Online. So, I am honored to feature her work on my site! Read part 1 of my interview with her below and stay tuned for part 2 on Wednesday!

“Black women have a heroic nature, and I wanted to show that you don’t have to be wearing head-to-toe spanx to be heroic.”

1) Can you tell the readers a little bit about yourself?  Since my blog name is Futuristically Ancient, in what ways are you and your work both futuristic and ancient?

I’m think I’m just like your readers. I’m futuristic and I’m ancient. I love storytelling. I love technology. Storytelling is how we know who we are – which is decidedly an ancient practice. And technology is how we shape where we are going – which is futuristic. I’m a total nerd and a geek. I grew up in Houston, Texas which I believe, hands down, has the best BBQ in the entire United States of America. 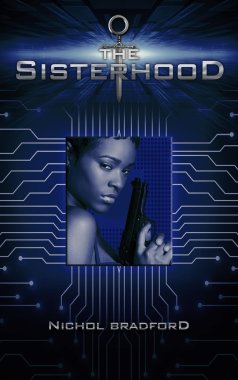 2) Who or what inspired you to be an author and write The Sisterhood?

The Sisterhood started on a late night drive home from a success workshop I gave during college. That night, I had this group of beautiful young black women stand in a circle and tell each other, one at a time and by name, that they were smart, beautiful, and could have anything that they wanted and worked for. It was a hard session, each and every young women cried when the group told her that she could actually have what she wanted. And I realized that we don’t know this…not really.

As I drove home, I felt really inadequate.  I know that workshops can help, but they don’t last long enough to really shift someone…or help someone shift themselves.  I started thinking about how I could show what it would look like, to be women who believed they could have what they wanted and worked individually and together to make that a reality. So I decided to write the Sisterhood. I conceived of an organization of women, who faced a series of challenges. Addressing those challenges would allow me to show versus tell how an individual can be successful. I went home and jotted the basic plot down which today is more or less the same.

I wrote the book I wanted to read about strong yet vulnerable and intelligent black women committed to a great and grand goal — mental freedom and empowerment for all. I was tired of not seeing heroes that looked like me. I wanted to see someone like me save the world, not as a side kick or agency head, but as the actual, certifiable central hero. I wanted to read about Olivia Pope back then, but since she didn’t exist yet, I wrote my own. I also wanted really well-developed characters who had something on their minds other than men. So some of the characters are happily married, and some are single, but most of all their focus is not just on their men (or lack thereof) but on their friendship and common goals. I also love technology and so wanted the women to be deeply immersed in that world.

Though I was an avid reader, I didn’t know how to write fiction. I didn’t know how to show not tell.  I had to learn how to write in order to share the story I had in my heart. I was lucky enough to meet the legendary literary agent Marie Brown, who introduced me to the woman who became my editor and my teacher.  I remember sitting at my computer at times, crying, because my skills didn’t yet allow me to tell the story I could see in my mind. But I refused to give up. I didn’t stop until The Sisterhood was complete. Since I was working full time, and more, I wrote at 5AM before work, after work and weekends. I missed parties, dates, and trips. But I got that story out of my heart and onto paper, dammit.

“Across the broad continent of a woman’s life falls the shadow of a sword. On one side all is correct, definite, orderly; the paths are straight…But on the other side all is confusion. Nothing follows a regular course…” – Virginia Woolf quote that inspired Nichol.

Black women have a heroic nature, and I wanted to show that you don’t have to be wearing head-to-toe spanx to be heroic. The “Superwoman” meme sells us short. It makes us think that there’s something wrong with our heroism. We believe that our heroic nature will ensure that we are single and have nine cats so we reject our nature so we won’t be alone or we believe that we can’t be heroes and also be vulnerable so we build walls around ourselves. Heroism is the flexibility to be strong and vulnerable and all of those things – while keeping focused on the wider mission. 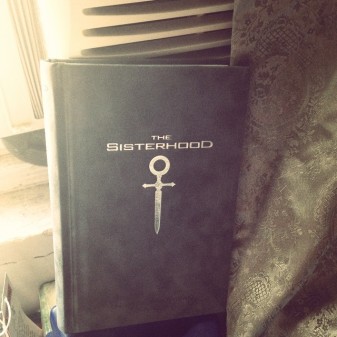 3) What message do you hope for readers of The Sisterhood to gain from reading it?

I’d like women who read The Sisterhood to become inspired to create change in their lives and communities. I hope that they embrace their heroism and technology. Black female heroism is perfectly suited for technology because it directly maps from our desire to being the agents of change to the ability to have an exponential impact on the world.

4) What inspired the book covers for The Sisterhood?

I love the new cover of The Sisterhood. It captures the blend of drama, focus and technology that sits at the heart of the novel. You can see it in the eyes of Tonia, the woman on the cover, she will not rest until she perseveres. Also, it has the iconic Sisterhood sword on the cover blended with a data stream that I think is also ancient and futuristic. The sword comes from a quote I once read about how the vast continent of a woman’s life crosses the shadow of a sword, where one side lies the known, but the other lies adventure [The quote is credited to Virginia Woolf]. I would say to the other side also lies purpose and mission. We are vessels of potential and we realize it now more than ever.

We have the power to change the world, we just need to recognize our purpose and go after it.

You can find out more about The Sisterhood and Nichol Bradford’s work at: http://www.mskincorporated.com and http://www.nicholbradford.com

Come back next Wednesday for Part 2!