…This would be a tv show, movie, book series, etc. Any takers?

From Myisha on Palace of Funk

I choose to design a detective from Louisiana who works specifically with the occult, particularly Voodoo (or rather the stuff people get up to when practicing Voodoo maliciously, rude). She’s also a practitioner herself, as her grandmother and great-grandmother were before her. She carries around gris gris on her belt to keep her protected, along with the bristles of a pig to prevent any spells being cast on her as she goes about her investigations.

She’s named after St. Anthony, who’s another depiction of Papa Legba, the spirit gatekeeper between the worlds of the living and dead in Voodoo, and also the Batiste family from Eve’s Bayou. That movie was the other half of the reason I wanted to draw something involving Louisiana voodoo culture. 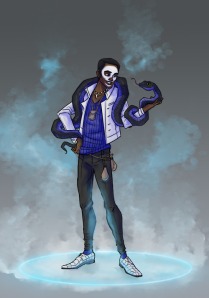