Yesterday, I watched Isaac Hayes’ Unsung on TV One and one thing that stood out to me about Hayes besides his musical talent was his fashion sense. The man who co-wrote the superhero lover songs like “Hold On, I’m Coming” and “Soul Man” for Sam and Dave, had his own particular smooth style. For a big, bulky Black man to not be afraid to wear bright colors like pink, red and orange would be thought of as a sign of gayness by some today, it was just a part of psychedelic style of the late 60s and 70s, and Hayes was one leader of that. He matched swagger with sensitivity. He wore the cool, insect-eye sunglasses before artists like Kool Moe Dee, rocked the bald head when it was not popular and wore outfits that made him look like a king from outer space. One such outfit was the one he wore at Wattstax, a vest made out of gold chains, like an alchemic transformation of the old grey metal chains of slavery, wearing it before Mr. T or early hip-hop stars wore gold chains on their necks.

His nickname “Black Moses” showed his larger-than-life legend and dressed on the album cover in a flowing robe and sunglasses definitely gave him a mysterious god-like coolness. Below he looks like a futuristic genie with turban and lighting design on his outfit, and a kind of Riddick look with his glasses in the next one.

And take a look at his Ra-inspired album cover for And Once Again. 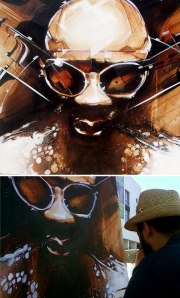 2 thoughts on “Behind the Mask: Isaac Hayes”