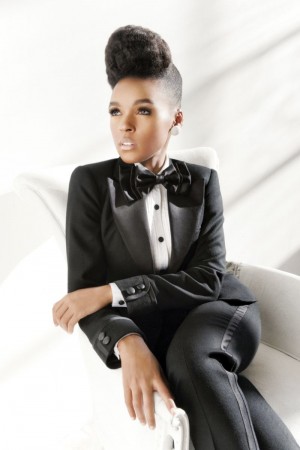 Currently, when we think of a black woman artist who showcases an androgynous or gender-bending look, we think of Janelle Monae. But, before Monae, other black women have challenged gender coding and in less accepting times, and possibly with less conventionally attractive features. Black women doing gender-bending often received less attention than when it is black men who do it, but it is just as important to highlight it as one way black women confront a world that can be sexist, misogynistic, misogynoiristic, and LGBTQ-phobic. This is a way of showing your womanhood and black female sexuality through a traditionally masculine mask, even as society already declares you as too masculine to be feminine or attractive. These woman were groundbreaking in their own right and paved the way for artists like Monae to do her thing. Let’s take a look at other ladies who have broke the mold in the past:

1) Gladys Bentley: If you study deeply into the Harlem Renaissance, you will come across that several of the major creative people were not heterosexual, like Langston Hughes, but that is often suppressed. One known figure was Gladys Bentley, a lesbian, cross-dressing singer and pianist of the 1920s. She was out and proud as a lesbian, known as the bulldagger of the Harlem Renaissance, and was known for her top hats, coat tails and suits.

However, during the McCarthy Era, she feared for her life and family, so she forced “back into the closet,” so to speak, and supposedly fabricated a story of being cured of lesbianism, returning to the church, and marrying a man. Still today, she is celebrated for her bravery in an era that was not comfortable with black women (or woman in general_ expressing themselves in such a manner. Ms. Magazine did a piece comparing her to Monae. Several people have paid tribute to her:

*Rapper and poet Shirlette Ammons dedicated an album to her, Twilight for Gladys Bentley, which you can listen to below. 2) Grace Jones: The Jamaican-born singer is known to play around with gender norms many times throughout her career. Her album covers, like Nightclubbing, Warm Leatherette and Living My Life, show that playfulness with gender and awareness of how she is viewed as a dark-skinned black woman with strong features that the mainstream would not classify as feminine. She disproved that proving that you did not have to have a traditionally feminine soft-look to be a woman, to be beautiful and to be sexual. Her ability to shapeshift into multiple forms, masculine, feminine and anything in-between, allowed her to display black female and black queer beauty and fashion in many forms. Maria Guzman does an in-depth analysis of her gender fluidity.

3) Ethel Waters and Josephine Baker: These two black women may have donned traditionally feminine and revealing outfits, but they did try on the suits, too. Black women, including these two, were known for singing about same gender relationships, were in queer relationships and played with gender and sexuality throughout their career, often in a covert way. Here is the Tain’t Nobody’s Bizness playlist featuring some of these songs and the accompanying documentary about queer ladies in the blues. Black woman were some of the leaders in gender fluidity and playing with gender performance.

4) The list goes on. Even in hip-hop with the androgynous fashions of black female rappers, like Missy Elliot and MC Lyte, or black female rappers using masculine performance or masculine posturing to be taken seriously in a male-dominated society, but also to highlight black women issues. Listen to Lil’ Kim’s “Suck My Dick,” where she inverts male posturing (verbal gender-bending) to fight back against sexist and misogynistic culture around her, and implies a kind of queerness about herself in the first verse. Basically, she says, if I was a dude, I would tell you to suck it, and I’m not a dude, and I’m still telling you to suck it.

Black women telling patriarchy and misogynoir where they can go — to hell!

One thought on “Rewind: Dapper Ladies”