Welcome back! Here is part 2 of my interview with Louis Chude-Sokei! You can read part 1 here.

“…What will matter in the long term is the impact we have on the (Sci-fi) genre itself, not on its packaging or clichés…”

4) Science fiction and fantasy have in the past been centered around European/Western stories and tropes and even in Afrofuturism, it was promoted previously as mostly Western/U.S.-centric. Briefly, how do you see Caribbean cultures, African cultures and other cultures around the world as early incubators, already exploring those ideas of science fiction, fantasy and futurism? Why is it important to explore those ideas in these cultures?

Science Fiction (SF) itself was produced directly by the response to slavery and colonialism in England and America.  This is a fact.  Therefore SF has always had within its DNA racial, colonial and sexual concerns—so its a mistake to see the genre as either “white” or “Western” or “European” since all of those categories depend on slavery and colonialism and, of course, industrialization.  As such it isn’t necessarily anything-“centric,” though the modern history of SF hasn’t been as good as it should be about making all of this clear, hence the necessary interruption that is Afrofuturism as well as the explosion of global SF.

The reason SF has such heavily metaphoric resonances with blacks, women, minorities and immigrants is specifically because those groups generated the need for SF in the first place–as a metaphor for material tensions and cultural anxieties!  That’s why I’ve never felt the need to claim SF/Fantasy or remake its genres in my cultural image: they emerge from that image or fears of it in the first place.  Race and sex are already primary incubators of SF.

Bringing all of this to light in the early history of the genre and tracing it throughout contemporary SF has been a real obligation for me because too much black thinking about SF deeply misunderstands SF itself, and too many misrepresentations of the genre are at the core of Afrofuturism.

This all being said, Caribbean and African and Asian, Latin American and Russian cultures have been present in SF from before Afrofuturism, though admittedly there haven’t been as many writers of color on the scene as there are today.  SF being a conduit for myth and history, it is inevitable that folks will use it as a technique of historical interrogation and as a method of generating new types of imaginations coming from distinct cultural and historical frameworks.  There really is nothing special about that.

As to the importance and value of what they are bringing to it—well for me as a hardcore genre enthusiast, it depends on the quality of the work but I know that many people of color only pay attention to something if it’s festooned with “cultural” or “ethnic” symbols or if it exploits nakedly identitarian signifiers. What will matter in the long term is the impact we have on the genre itself, not on its packaging or clichés.

“…”And the robot—as my book maps—is historically connected to the minstrel, with the cyborg being a more scientifically accurate and historically sensitive image of hybridity, mixture and creolization…”

5)   I have been developing an interest in trickster/cyborg mythology that I see in works like Ellison’s Invisible Man. Do you see trickster archetype as giving a context to your work? Did trickster stories influence you in any way?

Well, this is at the core of my work on Bert Williams and Jamaican theorist Sylvia Wynter, which came via Ralph Ellison who said exactly this: the blackface minstrel is a trickster!  That’s why the minstrel continues to offend, hurt and befuddle!  Blackface is how the trickster makes it into modernism and into contemporary popular culture—the mask, the two-facedness, the laughing instead of crying, the dancing and singing, the joke at the core of an American fantasy of freedom, the double-voicedness, the looking backwards and forwards at the same time (ancient and future), the ambiguity of dominance and submission, joy and pain, and the destabilizing of norms and the fluctuating of identity.

And the robot—as my book maps—is historically connected to the minstrel, with the cyborg being a more scientifically accurate and historically sensitive image of hybridity, mixture and creolization.

However, what we forget about the trickster—or don’t fully appreciate—is that the trickster “fools” everyone and isn’t on anyone’s “side.” Tricksters are as much a symbol of the oppressed as they are a sign of the pleasures of power, as much the hustler as the hustled.  They cannot be claimed or contained by any ideology, even those of resistance because tricksters are anarchic figures, pure chaos with creased slacks and a crooked smile. Tricksters disrupt, not just other people but also us and certainly you and me.

“…the equally long-standing intimacy between blacks and music must be read and heard as having always been about our engaging technology. It’s not just about lyrics and rhythm, it’s been about informatics…”

6) What would you like readers to take away from reading Sound of Culture? 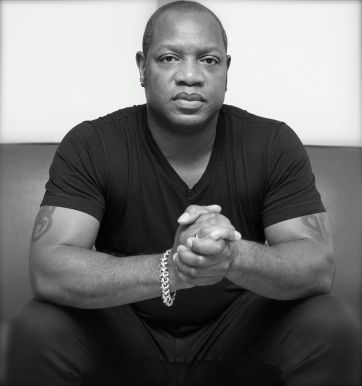 First, the long-standing intimacy between race and technology, and black peoples and Science Fiction — the genre hasn’t just become amenable to our rapprochement due to Afrofuturism, it was founded on the tensions and anxieties of the modern world: slavery, colonialism and industrialization, which is to say, race, Diaspora and technology.  Science Fiction was and continues to be the primary space for dealing with these questions, it’s just that not enough of us have been sensitive enough to its meanings and are still slow to acknowledge its implications (don’t blame the genre, blame your reading of it).

Second, that the equally long-standing intimacy between blacks and music must be read and heard as having always been about our engaging technology. It’s not just about lyrics and rhythm, it’s been about informatics.

And finally, that if we are really interested in the future, truly committed to a realm of open possibility, then we will have to embark on a fundamental reimagining of our sense of community that might threaten our current political priorities.  There is great risk in that and black folks need to take that risk urgently.  I’ll leave this last point enigmatic and point to the book for clarity (though if you hate theory/criticism you probably won’t find enough clarity at all in it but I won’t apologize for that).

7) Since my blog is Futuristically Ancient, do you see your work as both ancient and futuristic? If yes, how so?

My work is ancient in that it’s committed to the crusty, dusty and dangerous corners of the global historical archive—parts that many of us would rather shun because they don’t suit a contemporary political urge or popular therapeutic narrative.  The past isn’t there to make you feel good about yourself, though the struggle with it can do precisely that; but that’s not the point.

It’s futuristic because it looks and listens through the detritus of history for things and tools that we have ignored or hidden and that can be only valued in the wake of our current cultural habits and political conventions.  It’s focused on that next shit: sounds, words and images fueled by a commitment to bastardization, cultural appropriation and heresy, and disciplined by material history, actual facts and a faith in the knowledge that even the things we’ve fought the hardest for—like our identities—are temporary.

As Ellison said, even skin too must eventually be shed.

Watch the trailer for The Sound of Culture below and buy a copy here!

Coming Soon: 1) Poetic Fragments from Schomburg Exhibition, Unveiling Visions and 2) The release of my chapbook!