Last weekend, I managed to attend the the Fore exhibition at the Studio Museum of Harlem before it closed. I haven’t gone to the museum in a while, so this was a treat. Fore was the fourth part of a series at the museum (Freestyle, Frequency, Flow), but I like the explanation for the name Fore because, as a writer, I like words, their roots and meanings. I never really thought about the word “fore” until the exhibition, but the word does give a sense of the complexity of time; it can represent something that happened earlier or first (before) but also something that is in front or forward. The two meanings combined imply something ahead of its time but happening at an earlier time; it almost sounds as if time is moving backwards or the future is in the past. Or maybe I’m over-thinking it.

Anyway, the exhibition had some innovative emerging artists who caught my eye and I want to highlight:

Jacolby Satterwhite: I wish I had gone to see his performance, but I enjoyed his video piece, “Reifying Desire: Model It,” which on one side showed him in a flashy outfit voguing in the street and he seems out of place and in his own world as passengers walk by, and on the other side shows the virtual reality world I imagine is in his head of him as a kickass superhero in addition to his mother’s futuristic digital animation.

Toyin Odatola: Her featured works were “Ishmael” and “You can have her…if you can find her” (pictured below) and I like her artwork because it comes across as the complexity of a universe revealing itself in the bodies of these people. They are dark and also filled with a variety of color; Odatala is showing the color as peering through the darkness or appearance of wholeness.

Her statement of her artwork: “Where some may see flat, static narratives, I see a spectrum of tonal gradations and realities. What I am creating is literally black portraiture with ballpoint pen ink. I’m looking for that in-between state in an individual where the overarching definition is lost. Skin as geography is the terrain I expand by emphasizing the specificity of blackness, where an individual’s subjectivity, various realities and experiences can be drawn onto the diverse topography of the epidermis. From there, the possibilities of portraying a fully-fledged person are endless.”

Firelei Baez: Her work, Blind Man’s Bluff: On Francisco de Goya’s manipulations of the elusive mirror and the Twerk Team’s eventual annihilation and production of both, featured yellowing pages of these old works written by white men with superimposed images of dancers in floral design prints all over them. I liked the contrast and the implied messing around with “history” and the “true image,”  but also giving it life in a sense.

Her work centers on “… a convergence of interest in anthropology, science fiction, black female subjectivity and women’s work; her art explores the humor and fantasy involved in self-making within diasporic societies, which have an ability to live with cultural ambiguities and use them to build psychological and even metaphysical defenses against cultural invasions.”

Caitlin Cherry: A poet could have fun with her paintings, “Super Premium” and “Defection and the Undying Affliction.” I like the liveliness of them through the exploding juxtaposition of various images, ideas and colors.

Crystal Z Campbell: “Future for Failures” was a unique take on resurrection idea of life after death. The juxtaposition of the video of a demolished building rising back up (reminds me of Slaughterhouse Five in which Billy Pilgrim watches a movie backwards) with the story of the speaker attending her father’s funeral and later laughing with friends. Additionally, the tie between rewinding and remembering in the artwork.

Akosu Adoma Owusu: Her short video and photograph collection, “Anancy,” is a precursor to her latest film, Kwaku Ananse. And while I am still trying to get over my general disgust of bugs, this is a quiet and beautiful piece that almost makes me want to commune with the spiders in the forest. Almost (maybe just stare at them for a while).

Kenyata AC Hinkle: By themselves, the images these superimposed monstrous drawings on these older photographs, are striking enough, but with titles like “Contagion,” “Infestation,”Cover Up,” and “Univited: Uncharting the Charted,” they give a whole different atmosphere to her art. Her art makes the natural unnatural.

Her statement about her art: “As a multidisciplinary writer and visual artist my works are grounded in historical research, invention, personal narrative, cultural criticism, and power. I am interested in how the idea of race/power is constructed and interjected into society and how one self-identifies. Be it the embracing of a fixed definition or the refuting of a fixed definition of self and culture. I am interested in the fissures of language and how it can be broken down, reduced, and flattened… As an artist I like to think of myself as a shape shifter constantly re-inventing myself with each project series that I take on. The threads of the conversation remain the same but the aesthetic presentations of the ideas differ but remain in constant conversation with each other, ultimately redefining their own outcomes and stories they want to tell about acceptance and belonging.”

Abigail DeVille: Her works were outside of the building and I am glad that I noticed that they were there because I never went into that area of the museum before. Then I came across her watery, rusted iron cage pieces, Haarlem Tower of Babel. I saw it as a culture building itself up from death and destruction, only to topple over with America underneath. 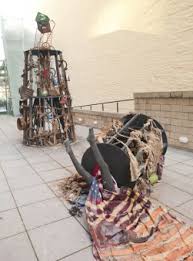